Location Design of Wireless Sensor Networks Based on DSP

The Wireless Sensor Network (WSN) has the functions of information acquisition, transmission, processing and dynamic topology. The micro-small sensor node has computing power and communication capability, and is deployed in the monitoring area to form a WSN intelligent network information system that can independently perform self-organizing specific tasks, and the wireless sensor node realizes self-positioning in the monitoring area.

In order to realize effective communication between nodes and nodes in the wireless sensor network node, Atmel's ATZB-900-B0 is used on the basis of the wireless communication hardware module and the IEEE 802.15.4 MAC protocol stack, according to the positioning network. Application requirements and the use of data commands, the node message format, message type and message content are formulated, the specific direction of the message is clarified, and the application layer framework of the node is determined. The ultrasonic correlation-based ranging algorithm is used to analyze the ranging performance and positioning system performance of the network nodes. The results of the positioning experiment show that the average positioning error of the node is 0.27m and the maximum positioning error is 0.76m.

The Wireless Sensor Network (WSN) has the functions of information acquisition, transmission, processing and dynamic topology. The micro-small sensor node has computing power and communication capability, and is deployed in the monitoring area to form a WSN intelligent network information system that can independently perform self-organizing specific tasks, and the wireless sensor node realizes self-positioning in the monitoring area. The wireless sensor node must not only be able to achieve its own positioning, but also be able to effectively arrange the appropriate nodes to eliminate the intruder when the intruder appears in the monitoring area, and play the role of independent defense.

At present, universities, research institutions and other organizations at home and abroad have developed many mature WSN positioning systems. Such as AcTIve Badge, AcTIve Bat system, AHLos system, SpiderBat system and so on. Among them, there are many researches on positioning methods and technologies in China, and foreign research is carried out relatively early. Many positioning systems have gone out of the laboratory and put into commercial application. However, there are still some key technical problems such as limited range of node ranging and low positioning accuracy. At present, the commonly used positioning technology is mainly based on infrared ranging, RSSI detection, acoustic wave and ultrasonic ranging, mainly for indoor environment applications. The infrared signal has poor penetrability, is easily affected by environmental factors, has a short transmission distance, requires a large number of sensor nodes, and the cost of the positioning system is high. Therefore, it is also very important to develop a simple, practical and convenient positioning monitoring system while completing the ranging positioning.

Aiming at the above problems, this paper takes the node high-precision system positioning as the goal, studies the related positioning technology based on DSP, designs and implements the ultrasonic-related detection and positioning system, and the system interface is friendly, which can provide better node self-positioning service support for WSN. 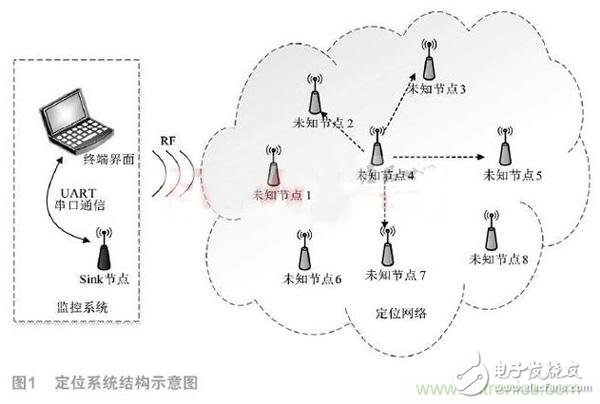 According to the actual requirements of the positioning system, the WSN positioning system is designed. The basic structure of the system is shown in Figure 1. The system is mainly composed of two parts: positioning network and monitoring system. The location of the nodes in the positioning network is randomly deployed, and its position is uncertain. The nodes use the ultrasonic correlation ranging technology to calculate the distance between the nodes using the correlation detection algorithm, and forward the distance information to the Sink node through wireless. The upper computer monitoring system is divided into two parts: Sink node information processing and terminal interface display. The Sink node calculates the coordinate position of the node according to the collected node distance information, and the terminal interface displays the network topology structure and node coordinates.

According to the specific application scenarios, the overall framework of the node is mainly composed of DSP, RAM, ATZB-900-B0 wireless transmission module, RF transceiver antenna, temperature measurement module, A/D sampling module, ultrasonic transceiver circuit and power module. In this design, the wireless data communication module uses Atmel's ATZB-900-B0 module, which is a high-sensitivity, low-power, ultra-compact IEEE 802.15.4/ZigBee module. The network formation of the positioning system and the message transmission between the nodes are all realized by ZigBee technology.

The ultrasonic distance measuring sensor is a micro-sized ranging radar with ultrasonic wave as the carrier, which has the characteristics of simple structure, small volume, low energy consumption, simple and reliable information processing, low price, and is free from illumination, electromagnetic, dust and smoke. Factor interference. In order to solve the unique problem of the directivity of a single Ultrasonic Sensor, this paper uses a six-element array method to evenly distribute six sets of ultrasonic transceiving probes on the sides of the regular hexagon, as shown in Figure 2, to ensure the full two-dimensional plane of the ultrasonic signal. Send and receive.

Since the node is in the wild environment, the power supply cannot be performed, and the node needs to maintain the working state for as long as possible or in the standby state, which requires the energy consumption of the processor to be as small as possible to extend the life of the node. So choosing a high-performance, low-power controller is critical in node design. TMS320C6748TM DSP is a new low-power floating-point DSP processor produced by TI. It belongs to the C6000 series and adopts the Very Long InstrucTIon Word (VLIW) structure, which guarantees the efficient operation of DSP. It combines the instruction set architecture of TMS320C67xTM DSP and TMS320C64xTM DSP to support DSP's high digital signal processing performance and Reduced Instruction Set Computer (RISC) technology to meet current application scenarios. In addition to high-speed processing capability, extremely low power consumption, and rich peripheral interfaces, it also has multimedia capabilities such as audio and video, and an external memory interface for high-speed STAT hard disk and SD interface. These are not the focus of this paper. Do not repeat them.

In the sensor network, when the ZigBee communication protocol is adopted, the nodes are classified into three types: Coordinator, Router, and End Device. The Coordinator is responsible for the initialization of the system, selecting the network channel and other parameters to establish a network for other nodes to join; the Router is responsible for the routing and forwarding of command messages between nodes; the End Device is responsible for the sending and receiving of messages, and can only be performed with the parent node. Data communication, does not have the function of routing and forwarding. In this system, the Sink node is mainly responsible for the monitoring network establishment, the analysis and processing of the upper computer command and the operation, data collection and other tasks. It is the data storage and processing center of the entire network, playing a bridge between the upper computer and the monitoring network. The role is the Coordinator in the system application. The node to be located in the monitoring network area needs to have the ability to forward and route other nodes. It needs to send messages to all nodes, and can also receive messages from all nodes. It is the Router in the system application. Each node is composed of a wireless data transmission module and a main control DSP module, and two modules of the same node communicate through a UART bus. Nodes communicate via wireless RF radio. The Sink node communicates with the host computer using the UART bus, and the communication method is not included in the communication method of the unknown node. The communication mode of the node is shown in Figure 3. 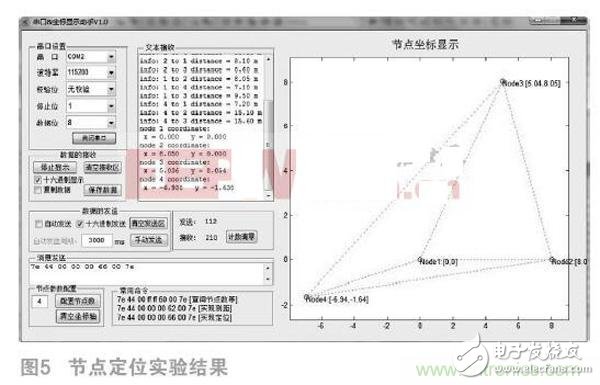 In this paper, the communication methods and messages of nodes are designed. Within the unified message format, various application messages are designed according to the tasks to be performed. Secondly, according to different system requirements and node types, different nodes are designed and explained. Program flow; at the same time, a good human-computer interaction positioning interface is designed. Finally, the experimental analysis of the ranging performance and positioning performance of the network node is carried out, which verifies that the system basically meets the technical requirements for ranging range and ranging accuracy requirements and node positioning. .